With this week booked off work as a holiday, i was hoping to get out for at least Three or Four days fishing. We did not fish last weekend because of other commitments so i was really looking forward to this week to finish off what's been a decent seasons Piking. Sunday morning i woke up to the rain and by the time i went to bed Monday night, it was STILL raining !
Tuesday morning i had a drive along the river and it looked awful. Chocolate Brown and full of various debris and rubbish floating on the top. Not good.
I decided to see how it looked in the morning (Wednesday) and maybe try again.
Wednesday morning myself and Dean load the boat after a full cooked breakfast and set off upstream towards the city centre. 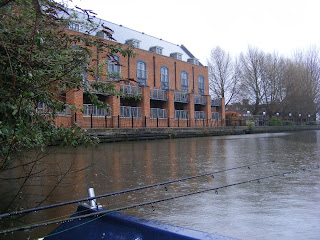 The river still looked very coloured but not quite as much debris coming down so we settled on a corner in the turning basin, out of the main flow.
It was already spitting with rain again, with more forecast during the day so we organised all the waterproof gear and even put part of the boat canopy up to keep the worst of the wet stuff off us. We started off fishing just one dead bait each. Dean choosing a Smelt and me a Mackerel tail.
We checked the baits and moved them into different areas several times but no takes were forthcoming. 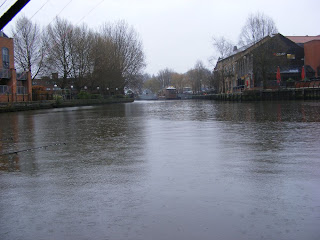 We tried the "Coffee" trick and that failed too. With the rain getting heavier and the river getting worse by the minute, at half past Eleven we decided to head back to the marina and have an hour there before packing up.
On arrival back at the mooring, i positioned a dead smelt close in and Dean set up at live bait rod with a small roach. It only took about Five minutes before the float on the live bait shot off, Dean boating a 3lb Jack. We had not been able to catch any live baits earlier as even they had refused to feed in the dirty water. I quickly set up a whip to catch a few in the boat dyke and got a small Roach first cast. I then spent the next Forty minutes trying to get another bite ! When i did get that bite, the whip hooped over and i was playing something much better than bait. The fish turned out to be a Perch of just over a Pound. Next put in, another one, slightly bigger. Next cast another one, bigger still. By the time i landed that one and re cast again,it was no surprise when the float dipped the next fish was another "Lump". This one was pushing Two pounds and was immaculate. I was fishing a Three metre whip with a size 20 hook and One and half pound line, not the ideal gear for big Perch but great sport.
I did manage to hook another Roach which Dean promptly mounted on his gear. Almost as soon as it hit the surface, it was taken. The fight was only brief but felt slightly bigger than the earlier Three pounder, the hooks coming out half way back. With the skies darkening again, we decide to pack up and head home to dry out.
In hind sight, we should not have bothered with the river today, we could have caught a few in the boat dyke. The fish in the dyke are not put off so much when the river is in flood, in fact it would not surprise me if more Pike head in there to shelter and feed in these conditions. The Perch fishing alone would be worth trying again, with slightly stronger gear next time, and some nice big Worms !