This Sunday finds me fishing on my own as Neil is away and my son Dean on birthday drinks the night before, so un available...
I decide as im on my own to fish fairly near the marina and take the opportunity to have a slight lay in and a later start. Its just after 7am when i get to the boat and after what seems Fifteen trips to and from the car,im loaded. Ten minutes later im tying up next to the outfall in fairly misty but mild conditions. The river looks fairly good today, as its so wide here anything floating down, stays out in the middle of the flow.

My usual float ledgered dead bait and a free running live bait rigs are set up. I position the Dead at Forty Five degrees to my right, this allows me plenty of room to explore with the live bait rod.
Within Five minutes of casting out the live Roach, a savage take self hooks a Pike of about 5lbs. It puts up a decent scrap in the flow of the outfall but its no match for the tackle im using. I hand it out and easily remove the lightly hooked bottom treble and slip it straight back. I re bait the rod and flick it straight back into the outfalls current. The bait is working well, the float lifting and dipping as the bait works the swim. The float suddenly lifts and lays flat on the top, normally a sign something has harassed the bait. Sure enough it then cocks the float and buries. An almost identical Pike is soon boated and quickly slipped back. Just as im thinking a nice days fishing is looking good, the rain which had been forecast, starts to drizzle.
I decide to leave just the dead bait out and make a coffee and within the Ten minutes im doing this, the rain is getting heavier all the time. As im fishing alone, im able to put the top canopy and one of the sides back on. This makes the boat into a floating bivi, it can rain all it wants now. 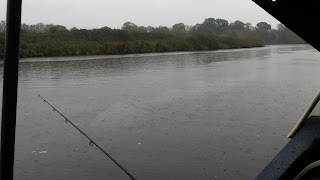 After a nice warming coffee i have another search around with the live bait rod. The rain is now full on pouring but i manage to get another take on and boat another small jack, this time just about 3lbs. No interest in the dead bait at all so far but another missed run on a livey seems to suggest the Pike want to chase their meals today...
With the rain heavy and set in for the day, around 2pm i decide to pack up and head home. Im on early shifts tonight,so i need to be asleep by Five ready for a Ten o'clock night shift.

Ps. It was still raining when i went to bed and never stopped till 6am the following morning... River looked "Brown" on my way home.
Posted by David at 15:37 No comments:

Me and my Brother Neil load the boat this morning with a fairly sharp frost over the canopy. The air temp is saying +2c but it certainly feels much cooler.
I had already popped over on Saturday afternoon to gather a few live baits so we would be able to get away fairly quickly on route into Norwich city center.
After last weeks encouraging start we both agreed to have another start down at the Playhouse Swim.
Fifty minutes later we are tying up on the far bank and are both setting up Two rods. One live and one float ledgered dead each. There seems to be even more leaves floating on the top this week, the sharp overnight frost obviously dislodging any that the high winds midweek had missed.
It turns out to be quite frustrating as we get the baits in prime positions only to have rafts of leaves and weed choking up the line and moving the baits.
several times we both re position our baits but to no avail. we end up fishing slightly out of the main flow which helps cure the problem, but neither of us are that confident our baits are in the right place.
We carry on moving and changing all of the rods for a full Ninety minutes without so much of a sniff. At 9am we decide to move about a mile down stream to the Quayside area. There is still plenty of rubbish floating down on the top but we position the boat to shield our floats.
This is looking much better and we settle down with a coffee to await developments.

Its just about an hour later and another move almost on the cards when Neils Float ledgered Smelt is away. A few seconds later the rod has a bend in it and Neil has one on. A brief fight sees a lively 4lb jack at the side of the boat and Just as i reach over to unhook it in the water it shakes itself off !
We both re cast with renewed optimism but its short lived. Another hour passes with no further takes.
we decide to head back through the city and try for the last couple of hours on the Riverside Road section. This is where most of the local matches are held during the winter months and the  bait fish spend all winter here too. There is a match on today, so we decide to fish past the end of the last peg near the football ground.
The leaves have thinned out a bit by the time they get here so we get our baits in as soon as we can. Sadly today turns out to be a gruler and i suffer my first blank of the season (on only my second trip !) Neil had the only run from the 4lb Jack and we head off with our tails between our legs licking our wounds .....