I've managed to temp my son Dean out today for a rare midweek trip.
As usual we start the day with a full cooked breakfast on the way at the local Greasy Spoon. I find it easier to do it this way during the week as we don't have to worry about cooking lunch. Its just about Nine am as we tie up in the middle of the "Match length" in the centre of Norwich. We don't get to fish this area much at weekends because there are normally matches on Saturdays and Sundays during the winter. The fish tend to shoal up along here from November right through to the seasons end in March and large nets of Bream and Roach are needed to win the matches. Weights of Thirty to Fifty pounds are not un common when it fishes here. The Pike obviously realize the potential of an easy feast and anglers often curse a large Pike for splitting up their feeding fish. Many a time you can see a bright coloured pole elastic stretching out right across the river. They are rarely landed though.
Anyway, we set up a dead bait rod each plus one for trotting a live bait downstream in what is now almost a normal flow.
We have been fishing an hour and both of us have run the float through at various depths and distances from the boat.
On my next trot, i keep the bait fairly close to the bank we are moored on which brings an instant take. We can clearly see the float a foot under the surface and as it starts to move off again,i hit it. As its so clear and the sun is now shining we get a full view of the fish twisting and turning under water as it tries its best to shake the hooks out. We almost get a "Tail walk" but it decides to throw the towel in and surrender. It goes 11lb 2oz on the scales, a nice start to the day. 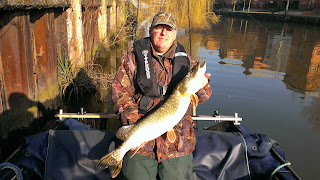 Dean is next on the live bait rod. Once again, running the float down the shelf produces another take just Fifteen minutes since i had  mine. Unfortunately for Dean, This one one does shake the hooks. It looked a similar size to the one i had.
We then move down to the next swim on this section, about 100 meters from the last one and try get the same response. We both miss another run each on the live bait rod so i set up one of the dead bait rods to fish lives as well.
We fish this new swim for about an hour with no more interest. Our next move will be into the turning basin Bush swim, another 100 meters upstream.
As Dean had yet to catch i put him in this swim and sure enough after about Thirty Five mins, his Smelt is picked up and the floats away. He picks up, winds down and strikes. Briefly the rod bends over but again after a few seconds it pulls off.
That proved to be the last action of the day and in full sunshine we head back at around half Two. If the weather stays settled for Sunday im very optimistic we will catch more than of late. Fingers crossed........

Weather -   -5c Start and remaining cloudy most of the day. No wind at all.

Following another week of almost constant rain and another bitterly cold start at minus 5c the river is again in a bit of a state as we load up for another session. We don't waste any time trying for live baits as the mooring is also looking like Chocolate soup. As we head towards the city, a shroud of mist is hugging the river making it feel even colder and quite ghostly.
Neil pilots the boat as i set up the rods for both live and dead baits.
I'm hoping to catch a few lives when we reach our first swim at the playhouse.
It never seems to take as long when your doing stuff on the way and we arrive at the swim just after half Seven. The mist is not as thick in the city and the river is a tinge of Grey instead of Brown here too. We are only half a mile downstream from New Mills Yard which is where the tidal river finishes or starts depending on which way you come from. 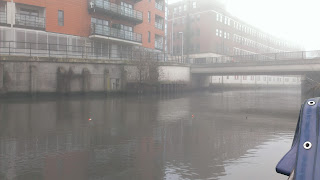 A misty start to the day

We soon have just one dead bait out each, i also set up and have a go with a small bomb rod for the live baits. The flow is still much more than we like here and we have to increase the size of our ledger weights to keep them holding in the flow.
At just about 9am i get a few plucks at my Smelt followed by a classic sliding under. I wait until the braid tightens then lean into it. The rod goes over nicely and im into what feels like a decent fish. A few seconds later its off.
I reel in and check the bait, its heavily marked but everything else looks fine.
I get a new bait back out and carry on with the bomb rod which up to now has produced nothing.
During the next half hour our baits remain untouched but Twice in the space of Ten mins we see a largish fish swirl on the top on the opposite bank. Its on the outside of the bend here and it looks like the flow is a little slower so we decide to move over there and try fishing in the slower part of the river.
Another hours drifts by with still no improvement so a proper move is called for and we head back downstream to the Turning Basin at around Noon.
This is another swim where we can moor up out of the main flow and thus keep our baits clean from rubbish etc. I give Neil the back of the boat swim, This is the bush that is always worth a fish or Two even when it fishes hard.
His bait is only out for about Fifteen mins when it shoots under and he`s in.
A lively fight results in a nice fish of 9lbs 14oz (on a dead Smelt) 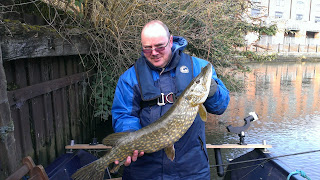 Apart from another missed run also from under the bush, that's the final action of the day. The mist has finally cleared as we head back at almost Three oclock.
Another frustrating day as i felt despite the river being a little off colour, we should have had a few more runs at least. The livebait rod never produced a bite all the times we tried it.
Next time......