Quite an unusual day today, im fishing on my own. Neil is unwell while Dean was going to a party on Saturday night so im going solo for the first time in ages. I still seem to be taking and loading the same amount of gear into the boat though. Im loaded and off the mooring at 6:30am heading upstream into Norwich city centre. Ive decided to re visit the swim we fished last Sunday to see how it fishes on the opposite tide. The low water today is at 9:30 so ill get a good Two hours of the ebb before it fills up again. The river is already fairly low now so it will be interesting to see how much water remains when it bottoms out. The journey takes about Fifty minutes to reach almost the furthest point you can navigate too and im pleased to see no one is fishing on the Two bank side swims on the opposite bank. 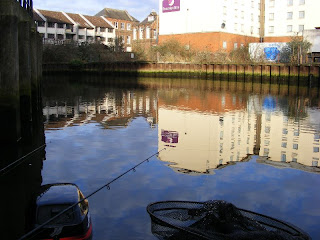 I have decided to set up and fish just Two dead baits today, hoping it might produce a bigger fish. Its 7:15am when i cast the first rod out, baited with a Smelt. The other rod is positioned close to the bank behind the boat, this one armed with a Bluey. As last Sunday, i don't wait long, just Fifteen minutes before the dead Smelt float starts "Twitching" on the surface, stands up and slides away. An instant strike and a 7lb Jack is boated. I unhook the fish and manage to get my bait back too, hardly marked so i re use the Smelt again. I re position the rod right down the centre channel and finish getting organised. As there is just me today and therefore more room, ive brought along a low slung comfy chair to relax in.
No sooner im sorted out and settled in the chair, the Smelt float is dancing on the surface again. Its just 8am and im into a slightly better fish this time.
A stocky battered and bruised fish of just about 10lbs is boated after a brief fight. As im un hooking it i notice some thing has had a grab at this fish at some point. A well healed battle scar on both sides of the fish tells me this fish was almost a meal for something much bigger. I set up a quick self timed photo just for the blog and also to keep a record for any future, repeat captures. 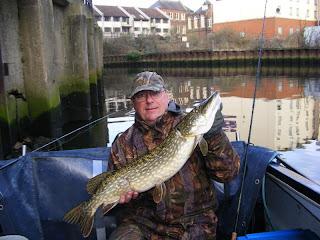 After returning the fish i get the kettle on and re position the Smelt back into the channel. The other rod with the Bluey remains untouched, so i move this further out from the wall onto the edge of the main channel. Im back in the chair and an hour and a half slips by without any more takes. There are bait fish topping all over the river which by now is at its low water mark. There is still about Three foot of water close in and almost Seven feet mid channel but i can see now though most of the colour has dropped out, various light objects clearly visible on the bottom under the boat.
I quickly set up my float rod and catch a couple of small Perch to try on one of the rods. The perch produces a small 4lb jack within Ten minutes but that is the only other take i get.
I decide to have a move back down stream around midday and set off down Riverside road towards the turning basin. Norwich city are playing at home today, champions Manchester Utd are in town. As i approach the Complete Angler pub, i see and hear there are at least 200 Utd fans already in full voice. I try to creep past on the far side of the river but its not long before im the target of the  "Well oiled" fans with chants of " what the F****** hell is that directed and me and my boat. More and more join is i pass and i cant resist giving them a sly one fingered salute.... Who are ya ? Who are ya?
is their reply.  I finish up fishing not far from the back of the football ground, listening to the radio and hearing the roars from the stands as Norwich take Man Utd into the 93rd minute (Fergie time) before that old "Predator" Giggs wins the game for Utd. Surely he should have retired by now !!! 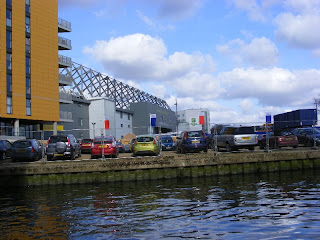 
The sun is out big time now so i head back and pack things away.
It seems the Pike do not mind the low and clear water, but as soon as the light gets too bright, they just shut up shop and sulk until the water level and the colour returns again.